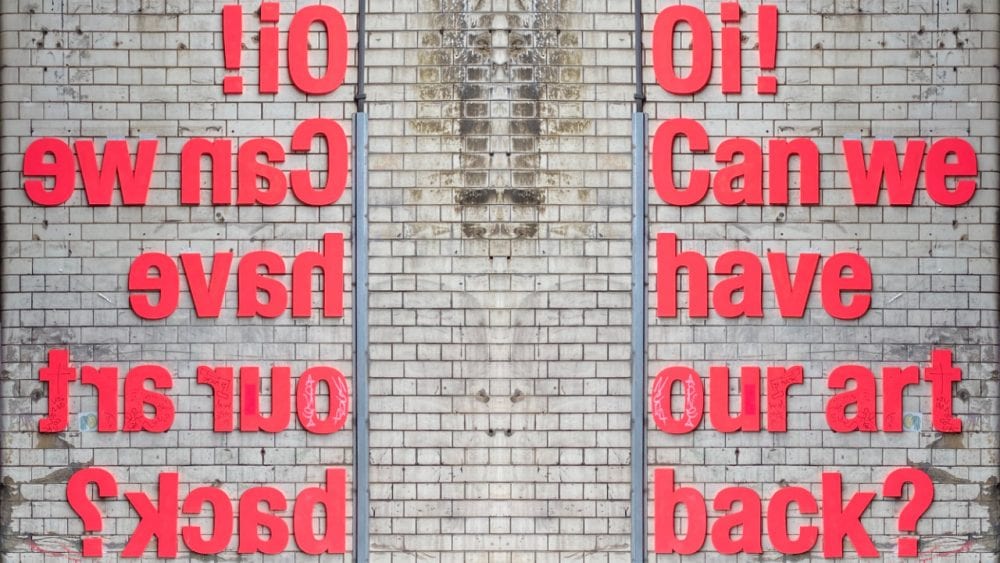 What is Cultural Democracy?

The concept that a society could take an inclusive approach to its own culture, engaging as many people as possible in deciding what counts as culture, where it happens, who makes it, who experiences it and who’s responsible for it when it breaks things. This description is not intended to be an exhaustive definition and one could argue that the phenomenon of social media and online communities are facilitating this process more rapidly than ever but let’s keep this within the sphere of the broader definition of ‘Art’, some of which exists on the internet.

Unsurprisingly, Cultural Democracy gained momentum after the Second World War with emerging practices in which culture and artistic expression were generated by individuals and communities rather than by institutions of central power. Even more unsurprisingly, Cultural Democracy gained a big foothold during the 60’s which, as eras go, has become almost a cliché of radical change.

Cultural democracy seeks to democratise culture in order to bring about an awareness and appreciation of art to as wide a section of society as possible. Some artists and groups have actively pursued ‘socially engaged practice’ whereby the participatory element and collaborative process is central or can be seen as the work itself.

In 2015 ‘Assemble’ a group of architects and artists including local Xanthe Hamilton, claimed the Turner Prize. The Turner Prize usually courts a bit of controversy and this year was no exception because seemingly none of them called themselves artists and they preferred pints and plumbing to actual ‘art’. Pretty radical. Assemble were around 18 strong and they talked about research and listening hard to the needs of communities; suggesting the actual built fabric and physical result from a project was not necessarily the most important aspect of their job, which was sometimes about setting up an organisation or scheme.

Although we mentioned the 40’s as being embryonic for Cultural Democracy, one could argue the ideas of John Ruskin and his Scottish counterpart Patrick Geddes were contributory at the turn of the century. Ruskin was the leading art critic of the Victorian era, artist and all-round renaissance man. He floated the idea that ‘all economies and societies are ideally founded on a politics of social justice. His ideas influenced the concept of the “social economy”, characterised by networks of charitable, co-operative and other non governmental organisations.

Whilst Geddes, was primarily a sociologist, he also became a pioneering building conservationist and town planner. His commitment to close social observation and ability to turn these observations into practical solutions for city design and improvement earned him a “revered place amongst the founding fathers of the British town planning movement”.

He adopted a theory that the concept of biological evolution could be applied to explain the evolution of societies. “Place, Work, Folk”. The family as the “biological unit of human society” from which all else develops. According to Geddes, it is from “stable, healthy homes” providing the necessary conditions for mental and moral development that come beautiful and healthy children who are able “to fully participate in life”.

A work of public art intended to engage ‘folk’ on their way to their ‘place’ of ‘work’ and highlight a very important social challenge was recently vandalised in St. Helier.

Ian Rolls large mural depicting climate warming stripes, which relate to Jersey’s temperature records from 1894 to 2019, was unveiled by the deputy Environment Minister Gregory Guida on 3rd June on the waterfront, above the underpass dual carriageway. The piece itself is a series of vertical coloured stripes or bands amounting to somewhere in the region of a billboard like presence.

Like a simplified heat map the piece aims to demonstrate the progression of ‘global warming’ a term which in recent years seems to have been subsumed by the tag ‘Climate Challenge’. It’s apparent that not all of the community share the artist’s sentiments or care to acknowledge the processes involved in its subject matter. A very small element of the community has, however, chosen to interact more directly with the work and create a dialogue. At midnight on Christmas day the work was ‘defaced’, a planned trip to the work by a handful of individuals resulted in unsolicited, sprayed and stencilled messages.

‘Brrrrrrrrrrrrrrrrrrrrr’ and ‘How dare U scare kids’ with a web address for a website whose home page banner claims ‘There is no Climate Emergency’. I can only assume the ‘EFFIN’ CRETINS’ stencil refers to their own fledgling graffiti troupe.

I was initially surprised at what seemed like pointless vandalism but then even more surprised when it became apparent that it was reasonably sophisticated. The artist initially reported being upset and had several offers from other artists to help him put right. One cannot deny that there are interesting points raised here about authorship and freedom of speech. At what point does one covering of paint on a wall become permissable and acceptable and another not so?

The artist has since announced that rather than restoration he is going to pursue a new avenue with the work. The dialogue around the piece has and is evolving to take new significance in the minds eye of the commuter. In Ians’s own words:

I think it’s going to be exciting, because it’s focusing on the conversational aspect of climate change rather than just stating it’s happening.

Perhaps unwillingly both parties interaction is of course drawing more attention to the ongoing debate which is in line with Ian’s intentions.

Later this year, we’ll see an ambitious installation exhibition rolled out in the hinterland of St. Helier. The focus for over 40 local and international artists, architects and designers is ‘Sustainability, identity and accessibility’. The event was postponed in 2020 but this has only served to supercharge it with more poignancy and give those involved more time to reflect on how these themes relate to life during a pandemic. Themes such as ‘sustainability’ have had less air time in recent months with much of the media focussed on Covid 19, the elections, Brexit and international social unrest, but they “still speak to the heart of our challenge as a community”.

Air travel is down, but how much difference has it made to worldwide carbon emissions? Single use plastic is up with PPE, disposable face masks and take away cartons to keep hospitality alive. We’ve assumed new physically distanced ‘identities’ wearing masks and interacting more digitally. ‘Accessibility’ to certain physical spaces especially for the vulnerable has changed the way we’ve navigated the world for the past year and these themes are now more pertinent than ever.

The creatives involved will tackle these themes head on during Skipton ‘Big Ideas’ the centrepiece of the Arthouse Jersey calendar for 2021.

St. Helier Town Church and it’s grounds will be transformed into a bespoke gallery featuring sculpture, light, augmented reality, sound and interactive installations. Expect pieces that you can step inside of, walk through, play with and processions of wearable art. The show’s integral themes should resonate with our community at large and look to widen the sphere beyond commercial art products.

Taking the audience away from the commercial gallery or the usual display spaces in Jersey instead to a historic building that has long been a focal point for the community and spilling out into it’s grounds with an engaging effect, catching the attention of passers by who may not be your usual art crowd. The works are a public intervention into the every day of St. Helier.