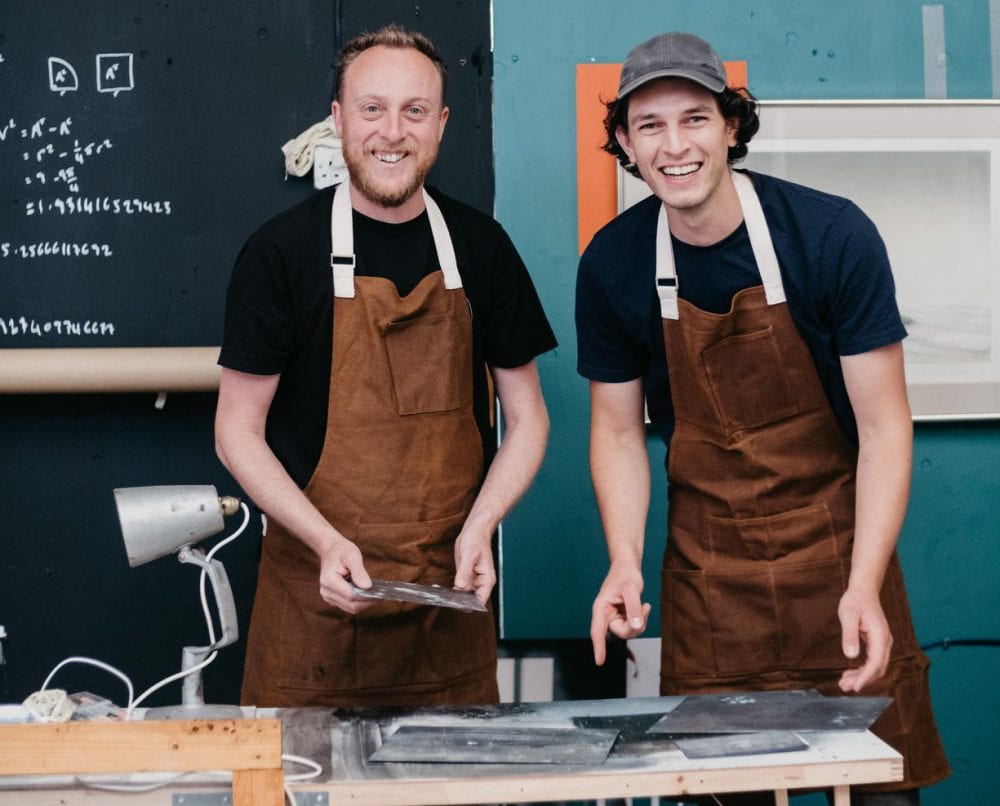 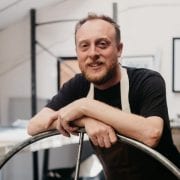 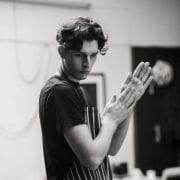 Luddite Press is a printroom established by the two printmaking professionals Tim Le Breuilly and Tom Parker. The studio is located in the Quartermaster’s Store of a Napoleonic Barrack Block. Apart from the access to printmaking facilities, Luddite Press provides classes and workshops, and currently counts 10 members who use the space on a regular basis.

What is your background in printmaking?

I studied Fine Art at The Slade and was predominantly a painter for years, I dabbled in some screen printing whilst at college. After London, I moved to the “Athens of the North” (Edinburgh) and volunteered at Edinburgh Printmakers for a short period of time as well as working as a gallery technician at various galleries in Scotland. It wasn’t really until ten years later that I really got to grips with photo etching. I studied towards my MSc in Architectural Conservation which was based at Edinburgh College of Art, making friends with the technicians is always a good idea and I got them to help me illustrate some of the buildings I’d been studying with photo etchings. My first etching was of a crofters cottage on Hoy, a smaller island off Orkney. Following on with a year’s residency at Fettes college, I was able to use their equipment to cement that process firmly in my practice.

I studied Fine Art Painting at the CASS in London and took the printmaking module after having enjoyed etching a year earlier whilst at art college in Carlisle. After my first year at university, I was told to make a choice between painting and printmaking as I could not be enrolled in both modules. The bureaucracies of creativity. I opted for printmaking and etching became the centre of my practice. Screenprinting was a sideline but still something I did regularly when I was printing a weekly newssheet – The Brhonical. Upon graduating I was given the Skingle award for Best Printmaking Practice and spent a few days etching with Nigel Oxley at his studio. It was three years later when I moved to Jersey that I started printing again and also became experienced in proofing and printing digital editions.

How did you meet?

Arthouse had put on an event at the library with free beer and pizza so after work I rushed over. I was already stuck well into a conversation with someone about the Le Gun collective and publication when Tim interrupted and introduced himself to me, perhaps having heard I had a press in my studio. I rented space above a motorbike shop in cosmopolitan St Helier and had been loaned a press by local artist Nick Romeril. Tim and I got talking about our shared interest in printmaking and the shortage of open access facilities for artists in Jersey, before leaving once the refreshments had run dry. I can’t remember what the event was. Further down the line Tim and I started sharing my studio space where we made work together and began developing our discussion of opening a shared studio space.

To have a printing studio, you need your own presses. How did you source your presses?

I managed to secure a Hunter Penrose press by rescuing it from the car park of a local school during its renovation. Manhandled into the back of a Mercedes Sprinter by a scaffolding worker the press went on to outstay it’s welcome at a friend’s workshop that stores his collection of vintage arcade machines. At this point, there was no plan and no space on the horizon. Space on Jersey is at a premium. A local character and fellow etcher was trying to sell a Rochat press online. Having no money and still no space at this point I initially ignored the advert. Did I really want another half tonne chain around my ankle? I later went on to make him an offer he couldn’t refuse, luckily, said character was in support of the idea to establish an open-access print room and this press was arduously dismantled and put to bed in Tom’s girlfriend’s Dad’s garage. By this point, the Hunter Penrose had migrated outside the arcade machine workshop under a tarpaulin.

What does your studio space and its surroundings look like?

The former Napoleonic Barrack block, now the home of Arthouse Jersey‘s creative hub’, sits a granite stone’s throw from the sea, elevated slightly with views of the wild, craggy-rocked port is Greve De Lecq. A unique setting for a printroom. The space itself is in the “Quartermaster’s Store”, a stand-alone building next to the cell blocks, and provides workspace with three printing presses to support several processes including; etching with copper, aluminium and zinc, linocut, wood-block and basic stencil screen-printing. Through Arthouse Jersey there are opportunities for residencies on-site with some pretty plush accommodation.

How did you find this unique space for Luddite Press?

To cut a long story short, we’d managed to draw enough attention to ourselves that when Arthouse Jersey relocated to a National Trust property we were offered some space there. After all the effort of moving and storing presses several times over with the help of friends eager for the opportunity to do their back in it’s rewarding to have the studio up and running.

Did you launch the studio or eased into it while using the space yourselves?

A bit of both really, as we had the presses but no space to walk into we got involved in doing a pop-up in the local museum as part of a makers exhibition. There was some pretty cool folk art in there. A strange Punch and Judy sculpture using lobster claws and some urns made from seashells. We ran a couple of taster sessions which were well received so by the time we got the space we knew what we were letting ourselves in for. There was then a proud moment when we got a special mention in the Minister for Culture’s speech whilst he opened Arthouse’s ‘creative hub’.

What were the challenges of setting up a studio in Jersey?

With two presses needing a home, the hunt for space was on, or rather it wasn’t really as options were pretty thin on the ground. People, on the whole, were helpful in entertaining the idea but the few spaces we looked at just weren’t suitable. In the meantime, we got more experience building and dismantling the Rochat for the museum pop-up. Inadequate sack trucks and a trailer hitched to my old banger were involved. After the pack-down, my car over-heated struggling to pull the half tonne press and I had to pull over to water it. In a cloud of steam, I’d fortuitously managed to get to the car park where they used to print the local rag.

How do you use the studio?

The idea from the start was to have a membership to allow other printmakers to use the space, and, although we are only recently established, there are several people using it in this way (plus Tim and me). Tim had taught an evening course at Highland College and gained the interest of several people in having access to more regular workshops. I had been working as a picture framer and had several instances of people expressing the desire to have a space in which they could make prints.

How has the events of 2020 affected things for you?

Unfortunately, we have had to postpone the workshops we had scheduled. As is the case for everyone, it all came at the worst possible time really as we had only just got them in the diary. Later in the year, we were able to run some with a focus on more outdoor working from nature, needs must but it was actually a really fun workshop and we’d probably repeat it. I managed to get myself locked down at my family’s home in Cumbria which obviously affected me getting into Luddite at all. We tried to develop our online presence on social media and released a series of “featured printmakers” we’re working within the UK. It was a chance to showcase their work and for us to display the breadth of things going on in print outside of Jersey. In a way, it’s been an opportunity for us to cast our net wider. Members were still able to use the space one at a time and sterilising when restrictions allowed.

It’s been frustrating not really knowing how far ahead we could plan but it’s given us the chance to focus more and we still managed to take part in an Arthouse pop up; a collaboration between the two of us, Luddite member Anna Shipley and Oliver Le Gresley who also has a studio on-site. The exhibition was well received by over 300 people through the course of a weekend.

What are your future plans for the project and the space?

Jersey has fared pretty well during the pandemic so we’re hoping things can normalize before too much longer. We should be able to host some printmakers for residencies. Bringing artists to the island is really important otherwise it can feel like a bit of a creative echo chamber at times. We’re both picking up new processes to be able to deliver a wider range of workshops this spring/summer. Prior to lockdown, we were awarded some funding to go on tour so we’d like to get on with that too as soon as it becomes possible. The plan is to visit several printmaking studios to make some work in another context and pick up any beneficial practices along the way. We’re also hoping to include ‘Solisquoy’ on Orkney and a space on Shetland as they’re both small island communities like ours. 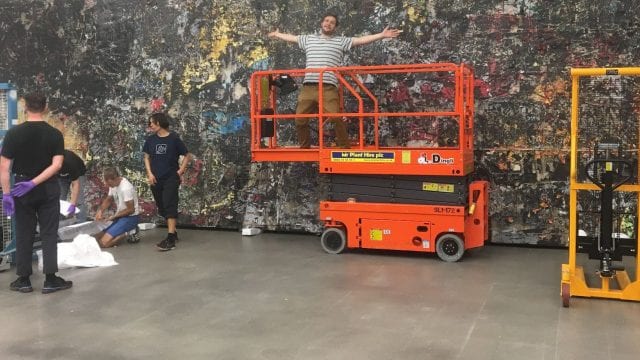