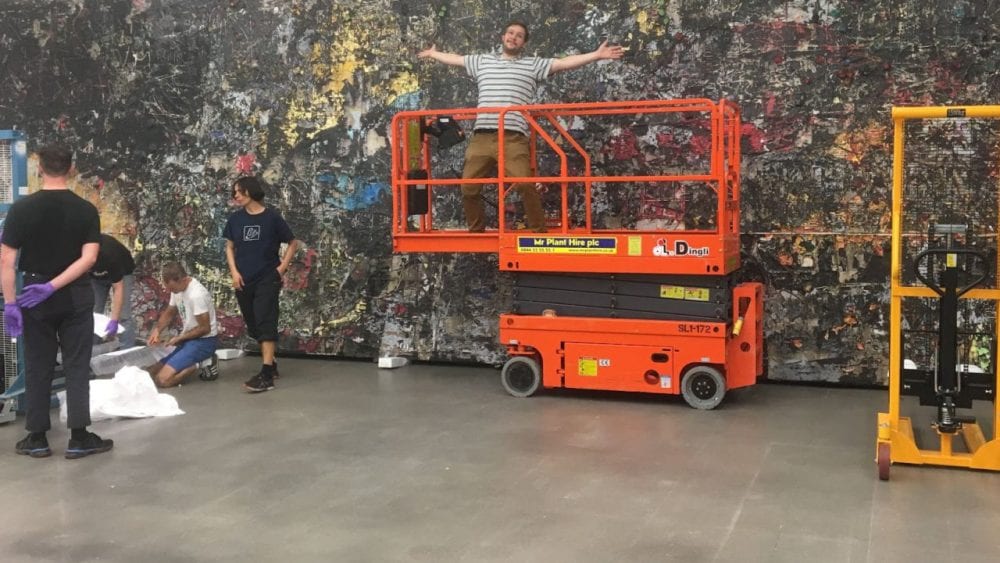 Gary MacDonald is a Senior Technician at Hauser & Wirth in London. Previously, he worked at Tate; and prior to that, he studied at the Royal Academy.

For those who aren’t familiar with the term, tell me about what a career as a technician entails?

In its most basic form, working as a technician entails being part of a team that takes care of artworks through the process of taking delivery, unpacking, installing/handling and repacking. It requires some understanding of the way artworks are made and how they should be best preserved, as you often handle things that are very valuable and fragile. Technicians are instrumental in the process of putting on an exhibition, and often assist with and advise on the laying out and lighting of artworks. You get a real sense of achievement when you have contributed to an exhibition looking amazing.

Depending on experience, the role can broaden to encompass other tasks in the planning of an exhibition. Producing increasingly sophisticated digital 3D visualisations has become very popular. Technicians help plan what an exhibition will look like and anticipate any practical problems that might come up. The opportunity to work closely with particular artists is valuable; you become familiar with their individual approaches and can tailor how the gallery cares for their works.

Being a technician can be a varied and interesting job. It can be creative, rewarding, physically demanding and exacting — requiring careful thought about disparate things. The role can involve being asked to do anything at all and thinking on your feet to solve problems; you are at the mercy and whim of an artist or curator, responding to their ideas and concepts during the installation. You are deeply involved in the creative process, perhaps taking no credit and often being invisible. Sometimes you need to learn about an obscure field of work you never expected to be involved in, like fish tanks or 3D scanning, to name a couple. The projects keep coming and changing, which is what makes the role interesting.

How did you begin working as a tech, and how has your career evolved?

I went to art college for six years, pursuing a career as an artist making paintings. During my time at the Royal Academy, there were opportunities for students to make money on the side. Some of us helped with the Summer Exhibition there, and I remember working on a Matisse show. It was quite a special experience for me, as a painter, to be up close and personal with works by an artist like that. That feeling of excitement that comes from looking at and handling works that I admire has never diminished.

A couple of years later, I ended up getting work for the Tate as an Art Handler, where I stayed for nearly seven years. It was an amazing job that I really loved. Whilst there, I became a Senior Technician at Tate Modern and worked on big, important shows, leading a team to deliver something really special.

For nearly ten years now, I’ve been a Senior Technician for Hauser & Wirth in London. I am involved much more in the planning stages of exhibitions at Hauser than I was at Tate. It is more fast-paced and, in many ways, a broader and more challenging role. We’re involved directly with artists and their estates, and the projects and responsibilities are extremely varied. I’ve been involved in the 3D computer modelling of exhibitions and galleries, which has pushed me to learn new skills, keeping things rewarding and enjoyable.

Do you find being an artist yourself helps or hinders?

I think being an artist and having a certain degree of sensitivity to the work you’re doing as a technician is generally helpful. Although looking at it the other way, while being a technician can expose you to great art in a way most people never experience, it doesn’t necessarily mean that your art career is helped by being a technician. I don’t think you ever lose the desire to create something of your own; but if you work as a technician full-time, inevitably your art career has to take a back seat, in order for you to perform well in your job.

I ended up doing technician work to earn money to live on but found it not to be not such a bad thing to do! For a time, It was possible to run my two careers in parallel: to be a technician during the day and to go into the studio in the evening and on the weekends. Now, though, I have two children; and it is important to make a living, look after them and be present for my family.

Certainly, my expectations of what might come of being an artist, and my understanding of why it is important for me have changed over time. Being an artist is an evolving process, and it has been affected by being a technician. I think this change in expectations comes as a result of the internal struggle a lot of technicians have. There are ways you can apply creative thinking and ethic to your work as tech and feel a reward similar to that of making art. So, in that respect it is helpful, but it is not without its problems!

In your various roles, you have worked on big shows, small shows, solo shows, group shows, art fairs, museum shows and more. Tell me a bit about how the tech experience differs depending on the type of show or venue.

It’s true that often museums work at a slower pace than commercial galleries, and care of works is the priority. But I’ve done enough big shows at the Tate to know that the same pressures can exist in both places. I’ve found that in private galleries, the efficiency (or speed) with which you work and the care with which you do things are both equally important.  Art fairs are the prime example of this: with limited time and resources, you’re expected to safely deliver things at the highest of standards. These can be the most difficult, high-pressured experiences as a tech, but also the most exciting.

Rather than the venue, I think the experience generally comes down to the team you’re working with. For me, one of the best things about being a technician is working alongside many wonderful, skilled, interesting and fun people.

I think large or small venues can have exhibitions that, for whatever reason, run down to the wire. Artists, in particular, like to pontificate and push boundaries. If you’re collaborating with people who are pushing in the same direction and working together effectively, even those stressful moments can be enjoyable. Across all the venues I have been involved in, from Dublin to Shanghai, I’ve always appreciated working with new people in new surroundings.

Although I’m sure there’s no ‘typical’ show, how long does an install usually take? How much guidance do you receive and how involved are you in the planning process?

In my current role, exhibition installs generally take up to a week, unless they’re something out of the ordinary. There is a team including myself, a registrar, an artist liaison and a director/curator who discusses the approach to take with scheduling and work. Sometimes there is building work to do in the week prior to the artworks arriving when the walls need to be moved or changed. I am responsible for arranging that, getting plinths made and planning how to get artworks into the building and installed (with any specialist equipment required).

I’m heavily involved in planning exhibitions, although this process has been changing in recent times. Due to the COVID19 pandemic, there has been an emphasis on modelling the exhibitions on a computer, which is done in conjunction with the artist. This results in a near-perfect show layout. So when the works arrive, the techs already know where they go. This makes the whole process a lot more efficient. I don’t know if it will ever go back to the practice of having an artist fly in with an entourage to help plan exhibition placements, as part of a lengthy install with uncertain outcomes. It might for some artists, and not others, I guess! It isn’t always possible to make good judgements about placements based on a video call or a digital mock-up, but it is certainly easier now than it was a couple of years ago.

Could you name a couple of your favourite artists?

Braque, Bonnard… that’s just the B’s, I could go on and on.

And your favourite artists that you have worked with? How do you find the experience of working with artists?

I have to choose Phyllida Barlow, as I’ve had a lot to do with her over the last nine years. There have been many exciting projects, and I really like her work. I find her inspiring as a person for what she has achieved, and she is down to earth and generous to everyone around her. In terms of meeting ‘great painter heroes,’ I worked on the Gerhard Richter show at the Tate, and it was exciting to meet him. Similarly, the Howard Hodgkin show at Tate Britain was a great one to have been a part of, and he was there for that.

What has been the most challenging install you’ve done?

Van Doesburg at Tate Modern springs to mind. There was a fairly small number of technicians and a tight deadline. We had almost 400 works to install and many international couriers. It was exhilarating, and I still wonder how we got it done.

And the most fulfilling?

I think often the most challenging installs end up being the most fulfilling, so some of the big Tate shows I was involved in were very rewarding. But more recently, Frieze London 2017 ‘Bronze Age’ (which travelled to Firstsite Colchester) and Frieze London 2016 ‘L’atelier d’artistes’ were brilliant projects to work on. Both were super hard work but mostly really fun. There are quite a few I could list here though, which has to be a good thing.

You spend your work days surrounded by museum-quality art, but how important is it to you to live with art at home?

I like having art at home, made by me, or my family and friends. But mostly I like getting into something and being really excited about it. This can be transforming a garden or discovering a particular type of cooking. Or playing music. For me, it’s about applying that same level of passion and curiosity essential for art-making or experiences to everything you can. 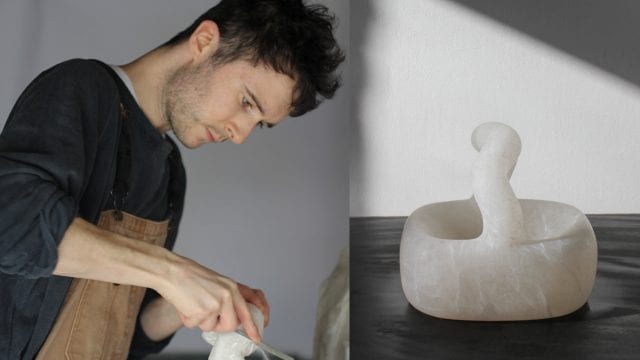 Connecting with Oliver Cook: The Light is Always a Consideration