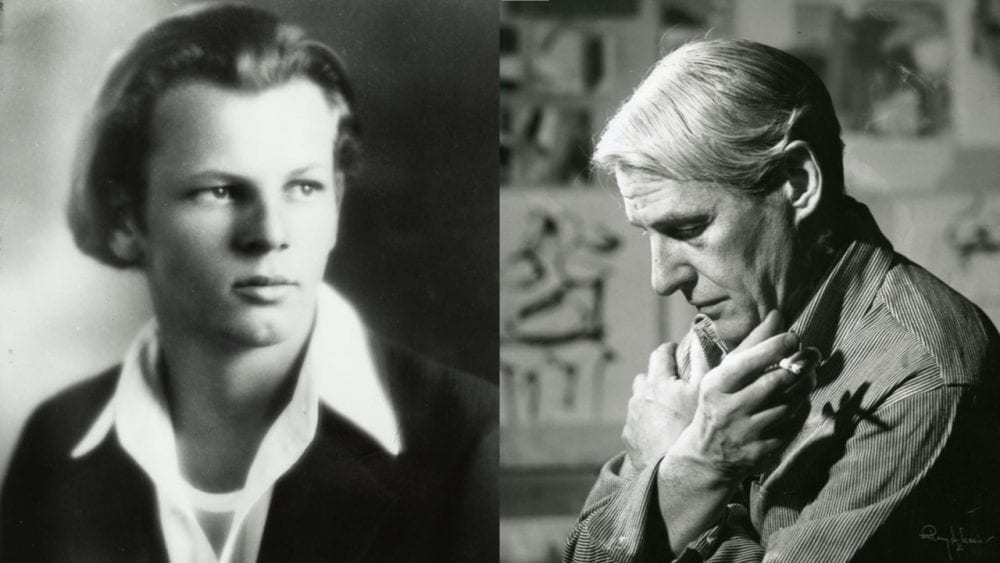 Following from our previous feature on Degas and Manet, this is the second in a series of five articles examining famous artistic rivalries, the factors that fueled their conflicts and the implications for the artists’ work.

Both artists were recognized and successful in their lifetimes. They both lived and worked in the same circles in New York; therefore, it is not surprising they had a close relationship. Given that both men also had struggles with alcohol, it is not remarkable that their relationships with others were sometimes fraught.

Although the two artists ended up associated with the same movement in New York, they started life very differently. De Kooning was born in 1904 in Rotterdam, and Pollock was born in 1912 in Wyoming. Both of their families struggled with resources, and both boys seemed keen to escape into artistic lifestyles. For de Kooning, this meant emmigration to America; and for Pollock, this meant moving to California and then New York.

Pollock struggled with personal relationships. He was argumentative, provocative, inclined to create public incidents and known to be a bad drunk. He had volatile relationships with his brothers throughout his life, especially his brother Charles, also an artist. In contrast, he was able to form a strong bond with his teacher, Thomas Hart Benton.

For de Kooning, relationships were easier. He was well-liked, respected and socially adaptable. He was close to Arshile Gorky, and he married Elaine Fried in 1943. Their relationship was turbulent, non-monogamous, and in some ways, inconsistent. They split in 1957 but remained intertwined, ultimately reuniting in 1976 (before Elaine’s death in 1989 and Willem’s in 1997).

Lee Krasner, Pollock and de Kooning participated in a group show at McMillan Inc. in 1942. Krasner re-introduced herself to Pollock (after a brief meeting years before), and then she introduced Pollock to de Kooning.

As with Degas and Manet, de Kooning and Pollock’s love interests crisscrossed. Krasner was enamoured with de Kooning before she fell in love with, and ultimately married, Pollock. Krasner and Pollock’s relationship has been well-documented; by many accounts, Pollock was possessive, abusive and unfaithful. Controversially, Krasner’s career was put aside so she could assist Pollack and promote his work. While she acknowledges that this was her choice, it meant that her career was put on hold until 1948. This arrangement dramatically diminished Krasner’s artistic output, but her organization and promotion helped Pollock’s career flourish.

Krasner and Pollock became close with Peggy Guggenheim, the notorious and hugely influential art collector. Guggenheim agreed to include Pollock in a group show in 1943; his work received critical acclaim, and Guggenheim gave him a solo show and a contract, allowing him financial freedom. From these successes, Pollock received much attention in the press, leading to additional shows. Modern art was on the rise, and Pollock was the flavour of the moment.

In 1946, Pollock achieved a major breakthrough with his (now famous) drip paintings. Unsurprisingly, this remarkable diversion from any precedent in modern art garnered mixed responses. But Pollock’s artistic rival, de Kooning, openly admitted that he was jealous of Pollock’s talent.

In contrast, De Kooning’s success was more slow-burning. While he was respected in artistic circles and had his champions, he was not receiving his rival’s acclaim or gallery attention. As Pollock began to explore action paintings, De Kooning followed suit in his unique way. His efforts resulted in his first solo show in 1948, five years after Pollock’s first show. The show was moderately successful, and the critical response was good; it was then Pollock who felt jarred by de Kooning’s success.

From here, both of the artists’ careers began an upward ascendence. Pollock had a second solo show in 1949, and he was featured in Life Magazine, where he identified de Kooning as one of his favourite artists. Pollock and de Kooning were among the eight artists representing the US at the Venice Biennale in 1950. The other artists included were: John Marin, Arshile Gorky, Hyman Bloom, Lee Gatch and Rico Lebrun (curated by Alfred Barr and Alfred Frankfurter). Pollock had reached celebrity status, while de Kooning continued to develop his style and become more well-known.

But with fame came trouble for both. Pollock’s drinking was leading to fights, fallouts and strain with Krasner. He found himself ostracised from artistic circles that continued to embrace de Kooning. Pollock’s behaviour and his artistic-boundary pushing started to work against him commercially, and by the 1950s, he was falling out of favour. This evolution fed his insecurities, leading to more unsavoury behaviour and creating a vicious cycle.

By 1956, Pollock was unable to paint, and his dependency on alcohol had deepened. He was having an affair with Ruth Kligman, and he had become ever more isolated. He and Kligman’s friend, Edith Metzger, were both killed in a car that he was driving while intoxicated in August of that year.

De Kooning and Kligman dated after Pollock’s death, and de Kooning continued a meteoric rise to fame and commercial success. Like Pollock, however, de Kooning struggled with this fame and drank more heavily. Ultimately, his heyday was brief: Pop art was on the rise.

Both de Kooning and Pollock changed the face of modern art forever, and both remain seminal features in any art curriculum. Their works were featured, alongside their contemporaries, in the extraordinary Abstract Expressionism Exhibition in 2016 – 2017 at the Royal Academy, which then travelled to the Guggenheim Bilbao. Krasner was also featured, and despite the backseat, her career took during her relationship with Pollock, she is now fully appreciated as a tremendous artist in her own right.